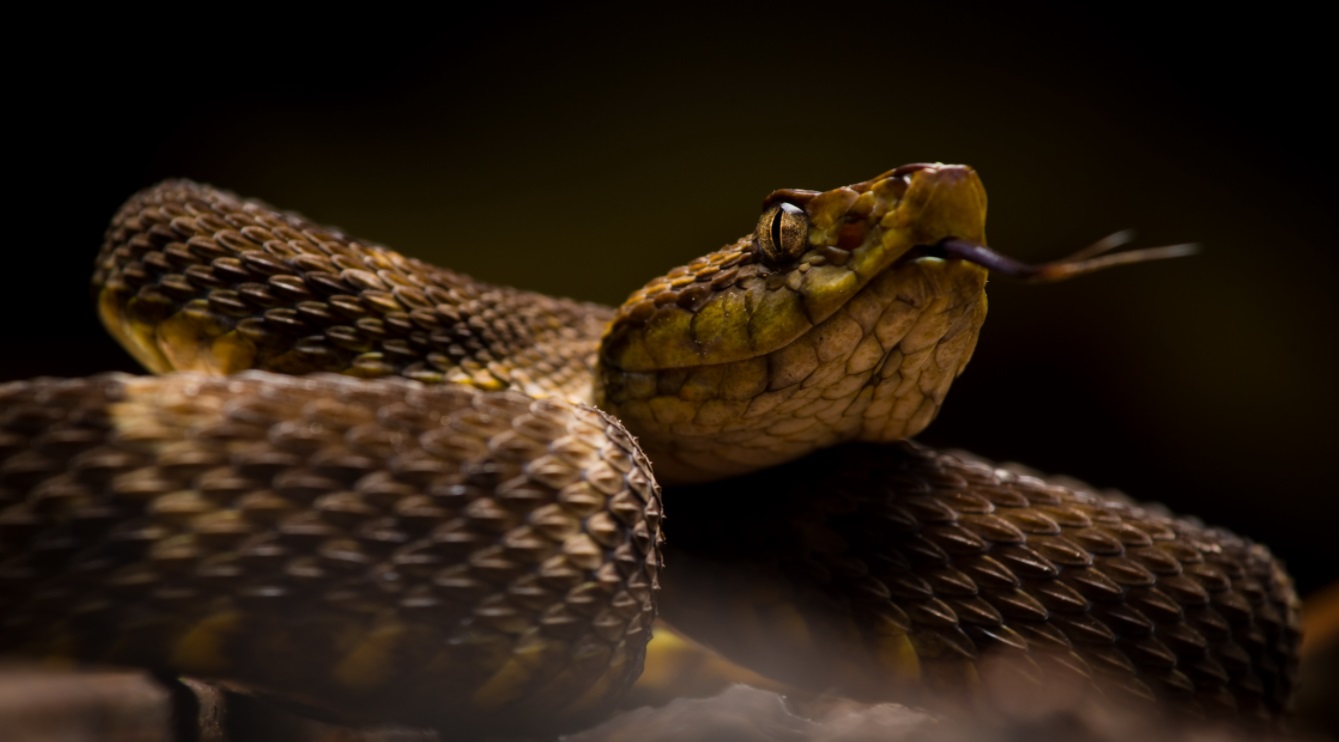 The wildlife found in Costa Rica, Ecuador, and Venezuela is full of wonders and surprises. For travelers who don’t have much experience in this kind of environment, it can be somewhat dangerous depending on the location and activities. The fer-de-lance is a big snake that sports quite a potent bite. If you are exploring South or Central America, this incredible creature certainly deserves your respect, thus why we made this little guide so you know everything there is to know about this giant tropical snake.

They particularly love the tropical rainforests, but they can also live in drier environments without any problem. You will find some fer-de-lances in Mexico as well, although they are commonly seen on the northwestern coast of South America.

Since these snakes love to eat little animals (like rats for example), they will sneak their way in and around fruit farms such as banana plantations. This kind of plantation is almost like a free buffet for our reptilian friends, so no wonder we find them sneaking around these plantations.

How big is a fer-de-lance?

It was observed that most fer-de-lances are between 4 and 6 feet long, while some females can go up to 8.2 feet in length. However, its size is not the thing you should worry about! As a matter of fact, the fer-de-lance is an extremely venomous snake and should be avoided at all costs.

Why is the fer de lance called like that?

The name originally came from either the French or possibly the Créole language, and literally means lancehead or spearhead in English. This name was first used to replace the Martinique lancehead’s scientific name: Bothrops Lanceolatus. The idea behind such a name was to symbolize the deadly venomous bite of this snake species.

As time went on, the name stayed and started to be commonly used for almost all lancehead species living in Central and South America. Furthermore, fer-de-lance can be used for jumping vipers, terciopelo snakes, and the habus venomous snakes, just to name a few.

Is the fer-de-lance an aggressive snake?

These snakes are no joke and are among the deadliest creatures in Central America. Especially the males, as a fer-de-lance male won’t hesitate to bite any human nearby if it feels uncomfortable or threatened. So if you see one, you better stay as far as possible!

Why is the venom of the fer-de-lance so dangerous?

The venom found around the teeth of the fer-de-lance is terribly potent, as one well-placed bite can inject over 105 mg of venom into your body. The human body, on average, can’t survive with a venom dose going over 50 mg. And if that wasn’t enough, some fer-de-lances that have been milked for their venom in a lab recorded bites containing over 200 mg, and rarely, over 300 mg of venom! If you get bitten by that, it’s almost guaranteed that you will experience an instant death.

How is the life of a fer-de-lance?

The fer-de-lances prefer being active at nighttime. During most of the day, they will stay hidden in a comfy spot where they can sleep. As soon as the sun sets, they get out of their hiding spot in order to begin the hunt. Finally, they often try to find places where there are a lot of rats, such as a banana plantation.

Some farmers actually let these snakes thrive, as they help in controlling the rat population on their farms and plantations. It’s amazing how it seems that everything in nature has a very specific purpose, isn’t it?

It actually depends on which species we are talking about. For example, the terciopelo that we briefly mentioned earlier is not an egg-laying snake. Since the latter is a viviparous snake, this means that the female doesn’t lay any eggs.

Moreover, the fer-de-lance breeding season takes place during the rainy season. In other words, the lancehead snakes will breed mostly from June to October, which is the best season for food.

As an extra note, a fer-de-lance generally reaches sexual maturity when the female is about 110 cm long, while the male can be around 100 cm long.

For how long does a fer-de-lance live?

In general, the lifespan of this species is around 20 years. Some snakes in related families sometimes live for a bit longer than that, but 20 years is pretty much the end of the line for most fer-de-lances that made it this far.

Do fer-de-lance snakes have any enemies?

No, not really, as they are ambush predators that live a nocturnal life. They move very fast and get aggressive pretty quickly. Their size and the potency of their venom are putting them at the top of the food chain in the tropical forest.

What happens if I get bitten by a fer de lance snake?

Depending on the potency of the bite and where you got bitten, you may or may not have a chance of survival. Put simply, the anticoagulant found in its venom will basically cause your muscle tissues to bleed. In other words, internal hemorrhaging will almost instantly start to occur in the whole body, preventing the blood to circulate properly. The blood cells and tissues will then die in the minutes that follow, causing an almost certain death.

Is it possible to survive a venomous snake bite from a fer-de-lance?

There is in fact an antivenom that exists for the fer-de-lance’s venom. On very rare occasions, some people have survived a bite from a fer-de-lance, but those cases are few and far between. What is problematic is that there is not much survival rate data provided by Costa Rica and other places where this snake thrives.

In 2020, it was reported by the Tico Times that a 55-year-old man survived a fer-de-lance bite. He was lucky to get immediate help and treatment. Antivenom research is always in constant evolution, but until we found an instant cure, stay away from the fer-de-lance.